The University of Illinois has just produced the first high-resolution map of the food supply chain in the United States.  It’s eye-opening in many ways.  Fast Company reports:

Our map is a comprehensive snapshot of all food flows between counties in the U.S.—grains, fruits and vegetables, animal feed, and processed food items.

This map shows how food flows … in the U.S. 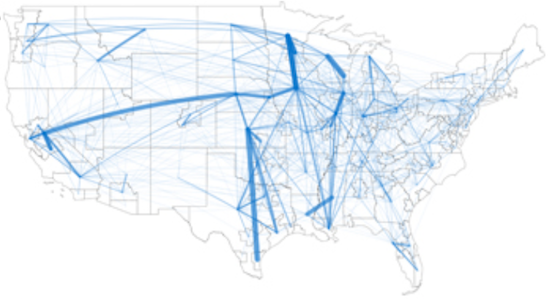 What does this map reveal?

1. WHERE YOUR FOOD COMES FROM
Now, residents in each county can see how they are connected to all other counties in the country via food transfers. Overall, there are 9.5 million links between counties on our map.

All Americans, from urban to rural are connected through the food system. Consumers all rely on distant producers, agricultural processing plants, food storage like grain silos and grocery stores, and food transportation systems.

For example, the map shows how a shipment of corn starts at a farm in Illinois, travels to a grain elevator in Iowa before heading to a feedlot in Kansas, and then travels in animal products being sent to grocery stores in Chicago.

2. WHERE THE FOOD HUBS ARE
At over 17 million tons of food, Los Angeles County received more food than any other county in 2012, our study year. It shipped out even more: 22 million tons.

California’s Fresno County and Stanislaus County are the next largest, respectively. In fact, many of the counties that shipped and received the most food were located in California. This is due to the several large urban centers, such as Los Angeles and San Francisco, as well as the productive Central Valley in California.

We also looked for the core counties—the places that are most central to the overall structure of the food supply network. A disruption to any of these counties may have ripple effects for the food supply chain of the entire country … San Bernardino County led the list, followed again by a number of other California transit hubs. Also on the list are Maricopa County, Arizona; Shelby County, Tennessee; and Harris County, Texas.

3. HOW FOOD TRAVELS FROM PLACE TO PLACE
We also looked at how much food is transported between one county and another.

Many of the largest food transport links were within California. This indicates that there is a lot of internal food movement within the state.

One of the largest links is from Niagara County to Erie County in New York. That’s due to the flow of food through an important international overland port with Canada.

Some of the other largest links were inside the counties themselves. This is because of moving food items around for manufacturing within a county—for example, milk gets off a truck at a large depot and is then shipped to a yogurt facility, then the yogurt is moved to a grocery distribution warehouse, all within the same county.

There’s more at the link, and even more in the full report.

That map is very interesting, particularly from the point of view of those who claim that so-called Democratic Party strongholds – the cities – are utterly dependent on so-called Republican Party strongholds – more rural areas – for the food they need to survive.  Their implication, of course, is that in the event of civil unrest, the rural areas would hold a whip hand over the urban centers.  In one sense, yes, that’s correct;  but in another, it’s not.  Much of our food may be produced in rural areas, but much of that same food is processed and packaged and distributed in and from urban areas.  That puts a rather different perspective on the situation.  Without the producers, the processing plants would have nothing to process;  but the producers would have very little to eat, comparatively speaking, without the processors.  The interdependence is very real.

I was also struck by the importance of historical US cities and regions, and their trade networks.  Consider:

Given the thickness of the lines to and from those areas, it seems they still dominate our food production, even though the precise nature of what’s produced in and/or moved to each area may have changed over time.

There’s also the factor of imports and exports.  Looking at that map, it’s clear that a heck of a lot of US food production is exported, and a great deal of what we consume is imported.  Cutting either stream would have very serious economic consequences for both producers and processors.  I was particularly struck by Los Angeles County in California, which has the largest flow of both food imports and food exports in the whole country, by a very big margin.  It’s completely urbanized, with little or no food production taking place there;  but a very large proportion of California’s food output is processed there, and sent out to the rest of the country.  If that county was cut off from the rest of the country, along with its major port of Long Beach, we’d all be hurting.

Finally, look at the concentration of processing facilities.  Effectively, if you could isolate or “take out” about a dozen major cities, food production in the USA – in the sense of processed, ready-to-eat food, not raw crops – would grind to a halt.  From a strategic point of view, I’ve no doubt our enemies are fully aware of that;  and I’m sure our own armed forces are equally as aware of our enemies’ vulnerabilities.  That’s not very comforting for anybody.