The so-called “Sargasso Sea” in the North Atlantic Ocean is a time-honored name, dating back to well before Christopher Columbus’ day.  It may have been known as early as the sixth century BC, according to one ancient navigator‘s oral history.  The map below is courtesy of Wikipedia. 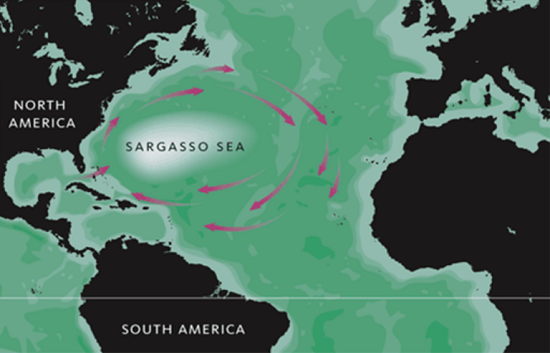 Its name was derived from the sargassum seaweed that proliferates there.  In more recent times, the Sargasso Sea has become the heart of the so-called North Atlantic Garbage Patch.

Now it looks as if sargassum is spreading south, into equatorial regions, and posing a new and highly unwelcome threat to the tourist industry in South America, the Caribbean, and even Florida.

Stretching up to 5,500 miles (8,850 kilometers) from the Gulf of Mexico to just off the coast of western Africa, the Great Atlantic Sargassum Belt appears to be the product of natural and human-caused factors.

[Researchers] identified a tipping point around 2009 when discharge from the Amazon River brought unusually high levels of nutrients into the Atlantic Ocean. Upwelling of nutrient-rich water off the west coast of Africa in the winter of 2010 further enriched surface waters with deep-sea nutrients; that upwelling also lowered temperatures of that surface water, allowing sargassum to thrive in the summer of 2011 … The largest recorded bloom occurred in 2018, when the Great Atlantic Sargassum Belt grew to a mass of more than 20 million metric tons.

“As sargassum decays it consumes the oxygen, creating low oxygen conditions, which is not a good condition for marine life in a coastal ecosystem,” Wang said. Coral reefs and seagrass ecosystems can suffer when high levels of sargassum change water chemistry and block organisms from moving freely.

“Sea turtles sometimes can’t swim through the dense mats to return to open water after laying their eggs,” she said.

The Great Atlantic Sargassum Belt is also having an effect on coastal tourism … In addition to disrupting coastal ecosystems, decaying sargassum releases hydrogen sulfide, a potentially harmful gas that smells like rotten eggs.

Here’s a video report showing the extent of the problem for the tourism industry.

It seems to me that recyclers are ignoring a potentially useful resource here – one that tourist centers might actually pay them to take away.  Sargassum, like other seaweeds, is often used as fertilizer in other parts of the world.  Why can’t it be collected and used the same way in nearby areas?  There are many other economic uses for seaweed;  follow those four links for more information.  Why not take advantage of those markets to dispose of a problem?