There’s a lot happening around China’s coronavirus epidemic.  Some is good news, much is not.  Unfortunately, the facts are all too often swamped by speculation and rumor-mongering.  For some reason, some people seem to like alarming everybody else, and they’re spreading falsehoods and made-up nonsense all over the Internet.  Please fact-check every report you read, and consider the source.  It’s hard to find good, accurate information out there.

However, there are some reports that appear to be telling the truth, and providing solid information.  I’ve gathered a few together here.

First, the disease itself, and how it progresses.  Dr Peng Zhiyong is the director of acute medicine at the Wuhan University South Central Hospital.  In a recent interview, he provided much useful information, including this.

I’ve observed that the breakout period of the novel coronavirus tends to be three weeks, from the onset of symptoms to developing difficulties breathing. Basically going from mild to severe symptoms takes about a week. There are all sorts of mild symptoms: feebleness, shortness of breath, some people have fevers, some don’t. Based on studies of our 138 cases, the most common symptoms in the first stage are fever (98.6 per cent of cases), feebleness (69.6 per cent), cough (59.4 per cent), muscle pains (34.8 per cent), difficulties breathing (31.2%), while less common symptoms include headaches, dizziness, stomach pain, diarrhea, nausea, vomiting.

But some patients who enter the second week will suddenly get worse. At this stage, people should go to the hospital. The elderly with underlying conditions may develop complications; some may need machine-assisted respiration. When the body’s other organs start to fail, that’s when it becomes severe, while those with strong immune systems see their symptoms decrease in severity at this stage and gradually recover. So the second week is what determines whether the illness becomes critical.

The third week determines whether critical illness leads to death. Some in critical condition who receive treatment can raise their level of lymphocytes, a type of white blood cell, and see an improvement in their immune systems, and have been brought back, so to speak. But those whose lymphocyte numbers continue to decline, those whose immune systems are destroyed in the end, experience multiple organ failure and die.

For most, the illness is over in two weeks, whereas for those for whom the illness becomes severe, if they can survive three weeks, they’re good. Those that can’t will die in three weeks.

The good news from Dr. Peng is that, even though there are no drugs designed specifically to counter Kung Flu, palliative and symptomatic treatment seems to work in most cases, particularly if it’s started by no later than the second week of infection.  I’m also hearing that patients who’ve been previously inoculated against pneumonia are able to resist the extreme progression of the coronavirus better than those who have not.  I’m very glad that Miss D. and I have both had a pneumonia shot (which is good for five years) within the last two years.  Furthermore, normal treatments for chest and nasal congestion seem to help with coronavirus as well.  I’ve made sure we’re stocked up on decongestants, cough medications and other over-the-counter remedies.  Basically, if you have lungs that are less than optimal (particularly if you suffer from asthma, COPD or other ailments like that), and/or if you’re an older person, you need to be particularly careful, and take extra precautions.

More good news is that the fatality rate from the current epidemic may be lower overall than previously feared.  The Telegraph reports:

The death rate for patients hospitalised with the coronavirus at the epicentre of the outbreak is nearly 20 per cent, according to new estimates.

But the researchers at Imperial College, London say the overall mortality rate is likely to be much lower – one per cent – because only the most severe cases of the disease in China are being tested.

In China only people with pneumonia are being tested so only the severe cases are being picked up, which explains the higher death rate here.

Again, more at the link.

There’s an interesting study on what surface cleaners kill coronavirus.  The article analyzes what’s available right now that works (and is officially certified as effective) against SARS and MERS (both caused by coronavirus variants).  If it works against them, it’ll likely work against the current epidemic as well.  Two products in particular appear to be readily available, and (according to the study) are officially certified against generic coronavirus and at least one of the above diseases.  They are Diversey Oxivir TB (which is much cheaper per bottle in a 12-pack) and Clorox Broad Spectrum Quaternary Disinfectant. 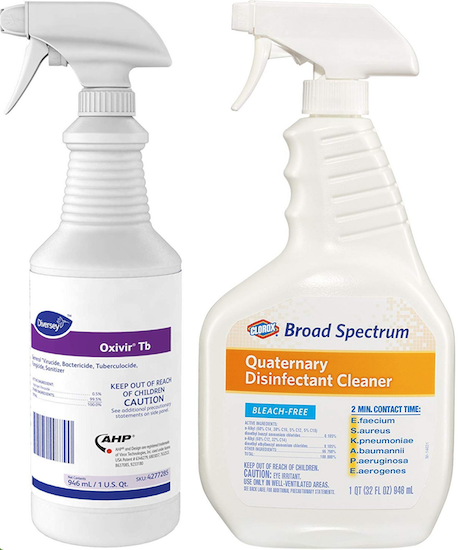 Yes, I’ve bought some, just in case.  As Old NFO and I agreed when talking about them, the old proverb that “An ounce of prevention is worth a pound of cure” definitely applies here!  I think, if you have kids who attend school, or any other family members who go into situations where there are likely to be others around them who are infected, products like these can help to clean and disinfect anything like lunch boxes, etc. that they bring home.  That was our standard precaution against cholera, dysentery and other diseases in Africa, where they’re endemic, so it should help here, too.  (These products could also be used to spray onto breathing masks after use.  That would help to deal with any infectious material on their surface, and might allow the masks to be re-used, if supplies are short – as they are right now.  Pure, concentrated bleach might also serve for that purpose.  You might find it useful to keep some concentrated bleach crystals on hand, to make up your own fresh, strong solution as needed.)

The same source offers another article about hand sanitizers that should be effective against coronavirus.  I recommend both articles to your attention.

So much for the health care side of the equation.  The economic fall-out from the coronavirus epidemic is beginning to gather speed – and it looks bad for the entire world, not just China or the USA.  For example, some Chinese firms are trying to plead force majeure to break their contracts for raw materials (particularly natural gas at present).  Suppliers are rejecting such attempts, but if the customers won’t accept delivery, good luck in enforcing the contract in a Chinese court.

Countries that rely on China to buy their raw materials are facing dire economic straits.  The New York Times reports:

The coronavirus outbreak in China has generated economic waves that are rocking global commodities markets and disrupting the supply networks that act as the backbone of the global economy.

“We’re seeing a rippling out,” said Ed Morse, global head of commodities research at Citigroup in New York. “And we don’t see it stopping.”

Prices for key industrial raw materials such as copper, iron ore, nickel, aluminum and liquid natural gas have plummeted since the virus emerged. Currencies of countries that export these goods at high rates, including Brazil, South Africa and Australia, are near their lowest levels in recent memory. And manufacturers, mining companies and commodity producers of all stripes are weighing whether they will be forced to cut back on production for fear of adding to a growing inventory glut.

The woes of the commodities markets — arguably the worst-performing asset in financial markets this year — reflect the basic reality that China’s industry-heavy economy is the most important consumer of raw materials on earth.

And drastic efforts to quell the outbreak, including a lockdown of Wuhan, a city of 11 million, and severe curtailment of transportation nationwide, have slowed the Chinese economy sharply.

The nations mentioned above are also US trading partners, so their economic woes will affect our commerce with them.  If their major companies are struggling to survive the loss of their biggest market, they won’t have much money available to buy goods from the USA.  They’ll also have a big incentive to try to sell their products to us, even at fire-sale prices, in order to get through the depression in their own economies.  That has implications for US producers, who might find they can’t compete on price against dirt-cheap commodity imports.  Worth thinking about, if you work in such an industry.

The epidemic is testing China’s ability to cope with the internal tensions it’s producing.

What’s more, the long-term fallout from the epidemic is likely to affect China’s economy for years to come.

The epidemic is already having a drastic effect on economic relations between the USA and China, driven by commercial and industrial reality rather than politics.

The ongoing coronavirus outbreak is speeding up the so-called “decoupling” between the U.S. and China more than their trade war did, according to an analyst from the Milken Institute.

“We talked about China and the U.S. decoupling. The coronavirus more than the trade war has sped some of that decoupling as countries, as businesses think about their supply chain for the long run,” said Curtis Chin, an Asia fellow at the Milken Institute, calling it an “increased disengagement” of both economies.

“It can’t all be in China, we’ve seen some of the consequences of over reliance on just one key market,” he told CNBC at the Milken Institute’s Middle East and Africa Summit in Abu Dhabi on Tuesday.

Chin said: “The reality is that the US and Chinese economies, from supply chains to investment and trade flows, will be intertwined for years to come. The coronavirus crisis, however, has underscored to the United States and all of China’s trading and investment partners the value of diversification away from China.”

Those are the nuggets of fact and reality that I’ve been able to dredge from the sea of rumors, misinformation and speculation out there.  Most of it bears no relation to reality at all – it’s rampant fear-mongering and misdirection.  We’re still weeks, if not months, away from fully understanding the coronavirus, much less finding a vaccine or a cure for it.  Meanwhile, let’s not go overboard, and operate on the basis of facts as far as we can.