As readers doubtless already know, partisan bickering has stalled the progress of the biggest-yet economic rescue package through the United States Congress.  I’m not blaming one side or the other, because both are equally at fault.  Republicans are focused far too strongly on bailing out big corporations at the expense of small business and individuals, to the tune of hundreds of billions of dollars.  Democrats are focused far too strongly on bailing out individuals at the expense of corporations, and adding new funding for their favored causes like abortion, welfare and Social Security.  Neither side has clean hands;  both sides are trying to “load” the rescue package with their ideological priorities, and neither side is putting the country as a whole ahead of party political interests.  Shame on them both.

The trouble is, while they’re squabbling in the corridors of power, the nation is hurting very, very deeply.  There are literally tens of millions of Americans whose jobs have evaporated within the last week to ten days.  They were living from paycheck to paycheck before the coronavirus pandemic, and now they have no more paychecks coming in.  Within a week or two, many of them are going to run out of money.  What will they do then?  Without some sort of rescue package, many will go hungry – and they’re going to remember that, come the elections.  I think our politicians need to be reminded of that.

I’d love to see a concerted effort from American voters to put their representatives in their place.  I’d love to see a grassroots campaign to tell Congress and the Senate (and our state and local governments as well), “You represent us, and you’re failing us.  Irrespective of your party, if you dither and try to score ideological points off each other at this time of desperate national need, we’re going to vote you out of office just as quickly as we can.”  To hell with whether they’re Republican or Democrat – vote against the incumbent if he or she won’t do what’s needed, and put country ahead of party.  Do the same to every incumbent who used their inside knowledge to sell off investments before the economic effects of the pandemic drove the stock market into the ground.  They’re beneath contempt, and should be treated as such.

That may be a pipe dream . . . but it may not.  We’ve seen the sudden, unexpected rise of the Tea Party, and this year the Democratic Party has seen insurgent candidates threaten to overturn the “old, wise heads” running that institution – a Tea Party of the left, if you will.  Maybe it’s time for the rebels in both parties to unite in a common cause, to put country ahead of party, and kick out of office all those who don’t.  How about it, folks?

When it comes to bailing out the big corporations, I think we should take a leaf out of the auto industry bailout over a decade ago.  In return for federal funds, General Motors and Chrysler handed over large numbers of shares to the federal government, which later sold them in an attempt to recoup at least some of what was paid out.  I didn’t agree with that bailout at the time;  I’d rather have seen weaker companies go to the wall in bankruptcy proceedings, leaving the stronger, fitter companies to take over their market share.  However, under present circumstances, where entire economic sectors are facing ruin, we’ve got to be realistic.  For example, if we want airlines at all, we’re going to have to bail them out, or go back to surface and ship travel.  Nevertheless, I’m strongly opposed to giving them “something for nothing”.  At the very least, I’d insist that every share these companies had “bought back” over the past decade, to the advantage of large investors but the detriment of smaller ones, should be handed over to the federal government.  Furthermore, at least as many shares should be turned over, at current (i.e. depressed) market prices, to match in value the amount given to each company in bailout funds.  The federal government can then sell those shares at a future date to recoup some of the taxpayer funds it has paid out.  Seems fair to me.

Meanwhile, some very nasty economic realities have not been addressed at all.  One is the fuel market.  Demand for gasoline, aviation fuel, etc. has plummeted, because so many fewer people are traveling;  but demand for diesel fuel is constant, if not increasing, because so many goods have to be delivered, not just to supermarkets and retail outlets, but directly to consumers, who are now ordering online in larger numbers than ever.  That’s a real problem, because diesel fuel is only one component of what’s produced from a barrel of oil.  Wikipedia illustrates the process of fractional distillation like this: 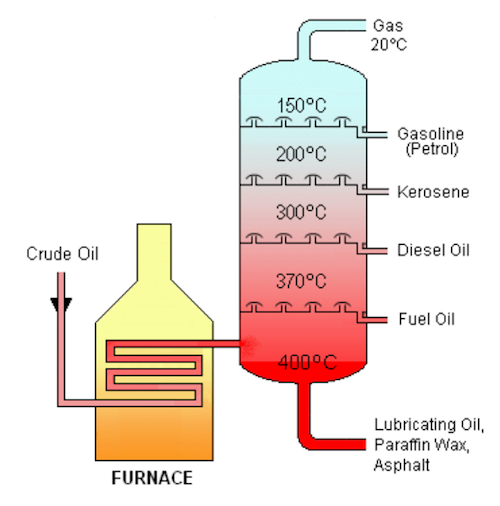 Any barrel of oil contains all those “fractions”, and must be split into them to be refined further.  One can’t just discard the fractions one doesn’t need – that would incur massive environmental pollution overnight.  Therefore, if (say) 20% of a barrel of oil can be refined into diesel, what are we going to do with the remaining 80%?  It has to be stored in tanks – but those tanks are already filled with gasoline, fuel oil, lubricating oil and other “fractions” that can’t be sold, because demand for them has dropped through the floor.  In other words, refineries can’t produce more diesel – or even as much diesel as before this crisis hit – because they have nowhere to put the rest of the oil “fractions”.  This is very bad news for our transport network, and I don’t think there’s been nearly enough attention paid to what we’re going to do about it.  Store unwanted petroleum products in salt caverns?  The Strategic Petroleum Reserve is already doing that with crude oil, but I doubt very much there are enough salt caverns within easy access of the refineries to expand that program.  Besides, I don’t know whether or not one could store fractional products in the same way as crude oil.  Are there other alternatives?  Our politicians aren’t addressing the problem at all in their rescue proposals so far.

I can’t argue with the policy of social isolation being enforced at present.  There appears to be no other way to slow the spread of COVID-19.  However, it can’t go on for too long, because that will not just shut down companies temporarily – it’ll destroy a great many of them.  The entire small business sector in America is under a greater threat today than any it’s faced in the past.  If small businesses go under en masse, they’ll put tens of millions of people out of work overnight.  The big corporations can’t possibly make up for those job losses – indeed, in the absence of the purchasing power of those newly unemployed people, the big boys will go under as well.  (Remember, over 70% of the US economy is dependent on consumer spending.  If consumers have nothing to spend, businesses won’t be able to sell them anything;  and without sufficient sales, businesses go broke.)

I’m also profoundly disturbed by some of the “power grabs” being mounted by national, state and local governments.  For example, the Department of Justice has asked for the right to detain Americans without trial or habeas corpus.  That’s anathema to our Constitution and system of justice.  It’s simply not acceptable in any way, shape or form, at any time.  Our founding fathers would have taken up arms against it, and I shall have every sympathy with those who choose to do that today.  Detention without trial is not justice at all – it’s Big Brother arbitrarily deciding, without any checks and balances, who’s free today, and who’s not.  This cannot be permitted under any circumstances.  Period.  If enforced quarantine or detention for health reasons is unavoidable, then let strong safeguards be built into the process, to prevent this becoming just another bureaucratic fiat.  To allow that would destroy our system of justice entirely.

There’s also the danger of overreach by petty authority.  I was told yesterday of a family in California who were confronted by local law enforcement, and told that they were not allowed to let their children play in their own fenced back yard.  They were threatened with a draconian fine if they did so again.  All I can say is, anyone who tried to enforce such policies against my family would run into a brick wall.  I don’t care who they are, they do not have, and never will have, that right or that authority.  To hell with them – if necessary, literally.  If they try to enforce such draconian overreach through the use of armed force, they will have abdicated any and all legitimacy, as will any politician, administrator or bureaucrat who tries to “authorize” such behavior.  As far as I’m concerned, they’ll all have made themselves into legitimate targets for civil disobedience and citizen resistance, by any means necessary.  (In case any of you think I’m anti-cop, allow me to remind you that I swore the oath of office of federal law enforcement personnel, and operated in their ranks in a support role for some years.  I’m not anti-cop at all.  I’m anti-jackbooted-thug.  There’s a big difference.)

Another big problem is the unintended consequences of government policies to address the pandemic.  For example, many local and state governments are releasing lower-level inmates from prisons, to alleviate overcrowding and forestall the spread of COVID-19 in such close quarters.  That’s a legitimate health objective . . . but it disregards public safety issues.  Those inmates are going to have to start earning a living on the street again, just when almost all businesses have been shut down under quarantine.  What are they going to do?  You know as well as I what they’re going to do – they’re going to revert to a life of crime.  I expect a massive increase in petty crime, and perhaps more serious offenses as well, as the newly released try to get money any way they can.  Even worse, some jurisdictions – for example, St. Paul, Fort Worth, Philadelphia, San Francisco, etc. – are no longer giving priority to lower-level offenses.  They might as well issue licenses to criminals to commit them!  It’s no wonder panicking people are trying to get their hands on guns, by hook or by crook.  The odds are pretty good that some of them will need them, sooner rather than later.

As long as our politicians – national, state and local – fail to address these critical issues, they’ll be fiddling while Rome burns.  They’d better stop that, PDQ, or they’re going to lose the confidence of the American people.  When that happens, the inevitable consequence will be that more and more Americans will stop obeying, and start disregarding, the laws of this nation.  That way lies an even greater disaster.