Today’s award goes to Haringey council in England, who let their eco-friendliness go to their collective heads.

Eco-campaigners who built a classroom powered by the sun believed they were paving the way for the future.

Instead they have been taught a valuable lesson – there is not enough sun in North London to sufficiently heat their building. 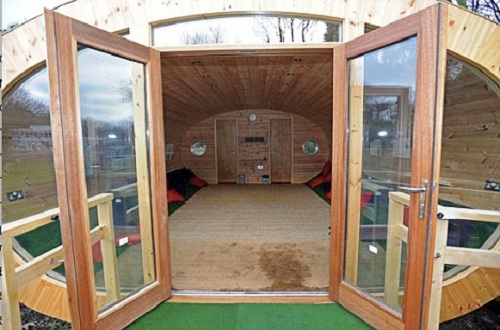 The much feted zero-carbon Living Ark classroom was opened three months ago to great fanfare.

It boasts laudable green credentials and is made from sustainable wood, sheep’s wool and soil. The roof is made of mud and grass and it has its own ‘rain pod’ and solar panels.

But there is snag – its solar panels only provide enough energy to power a few lightbulbs.

As a result the classroom is bitterly cold and uninhabitable for lessons.

Parents have branded it ‘useless’, an ‘expensive piece of wood’ and a ‘great idea for the Caribbean’.

It’s been a bad week for the eco-weenies. First the environmental friendliness of reusable shopping bags was debunked; then ‘non-polluting’ electric cars were shown to pollute just as much as some fossil-fuel-powered vehicles, albeit indirectly; and now this. It’s enough to make a vegetarian eat a steak – and one made of meat, not tofu, at that!