The Daily Mail reports that a German manuscript has been sold, which depicts what may be the first ‘plastic surgery’ to rebuild an injured nose.

A 16th century book detailing one of the earliest rhinoplasty operations came to light when it was sold at auction.

The incredibly rare work, titled De Curtorum Chirurgia Per Insitionem – meaning The Surgery of Defects by Implantations – was published in 1597, and was written by Gaspare Tagliacozzi, professor of surgery and anatomy at the University of Bologna. 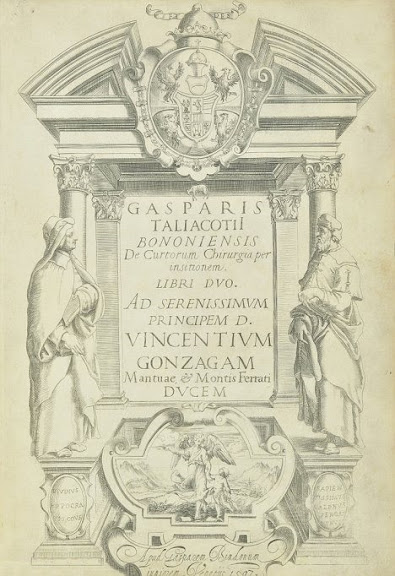 It describes operations carried out to repair faces that had been wounded in battle.

The tome, which is written in Latin, is illustrated with diagrams, including the rhinoplasty, in which the patient’s nose was attached to a flap of skin from his upper arm.

In one plate, the patient is seen in bed with his forearm attached to his head and a flap of skin from his bicep region stuck onto his nose. 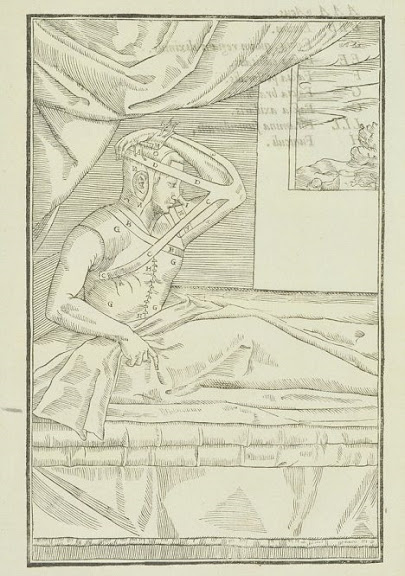 The book tells how he stayed like that for about three weeks until the skin from his arm had attached itself properly.

After a further two weeks the flap of skin was shaped so it resembled a nose and the process was complete.

That really amazes me! I’d never have thought that such advanced techniques were known as long ago as the 16th century, when the most advanced treatments for almost any disease or injury involved bloodletting, and the administration (as healing medication) of poisons such as arsenic and mercury! It seems that at least one doctor, in at least one place, was more advanced than his contemporaries . . . fortunately for his patients!