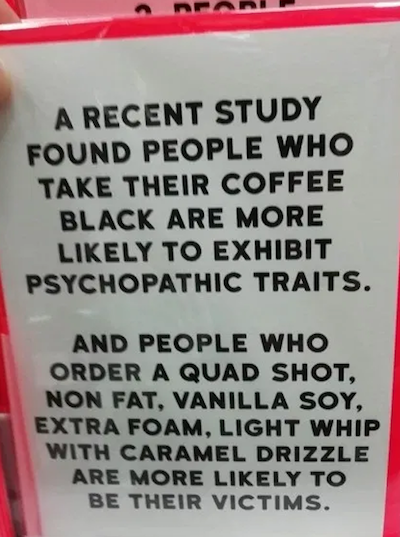 I’d say many of the former military servicemen I’ve met – particularly former Navy personnel – are poster children for the first group.  I can still remember the retired Chief Petty Officer who informed me (very loudly) that coffee wasn’t coffee unless you could stand your teaspoon upright in it, without support.  Also, it had to be as strong and as bitter as possible, “like me!”  As for milk, sugar and that other stuff . . . the less said, the better!

It does help one understand why so few millennials, comparatively speaking, will consider military service.  If they tried to order, in the chow line, the alleged “coffee” described in the second half of the above image, I think Armageddon would break loose!