I was amused to read that clay tablets, many thousands of years old, containing ancient Babylonian recipes have been decoded, and researchers are trying to prepare the dishes they describe.

The instructions for lamb stew read more like a list of ingredients than a bona fide recipe: “Meat is used. You prepare water. You add fine-grained salt, dried barley cakes, onion, Persian shallot, and milk. You crush and add leek and garlic.” But it’s impossible to ask the chef to reveal the missing pieces: This recipe’s writer has been dead for some 4,000 years.

Instead, a team of international scholars versed in culinary history, food chemistry and cuneiform (the Babylonian system of writing first developed by the ancient Sumerians of Mesopotamia) have been working to recreate this dish and three others from the world’s oldest-known recipes. It’s a sort of culinary archaeology that uses tablets from Yale University’s Babylonian Collection to gain a deeper understanding of that culture through the lens of taste.

Of the older three tablets, the most intact is more of a listing of ingredients that amounts to 25 recipes of stews and broths; the other two, containing an additional 10-plus recipes, go further in depth with cooking instructions and presentation suggestions, but those are broken and therefore not as legible.

The challenge was to peel back the layers of history while also maintaining authenticity amid the limitations of modern ingredients.

“I was really surprised to find that what is a staple in Iraq today, which is a stew, is also a staple from ancient times, because in Iraq today, that is our daily meal: stew and rice with a bread,” Nasrallah said. “It is really fascinating to see how such a simple dish, with all its infinite variety, has survived from ancient times to present, and in those Babylonian recipes, I see not even the beginnings; they already had reached sophisticated levels in cooking those dishes. So who knows how much earlier they began?”

It’s fascinating to trace human history and wanderings through local, regional and international cuisine.  Many people are unaware of just how many influences have helped to shape and form a food culture that they mistakenly regard as unique.

To take just one example in the United States, consider Texas “cowboy cooking”.  It blends food traditions from West Africa, the Caribbean, the Carolinas, Cajun and Creole influences, Spanish and South American dishes, and the uniquely home-grown “cook what you’ve got” approach of frontier settlers, plus modern adulterations of those historical influences, and combines them all into what has become a food tradition in its own right.  A fascinating book on the subject is “The Texas Cowboy Cookbook:  A History in Recipes and Photos“, which devotes a chapter to each of the major influences affecting that cuisine, and offers many authentic recipes.  I’ve made some of them.  They’re delicious! 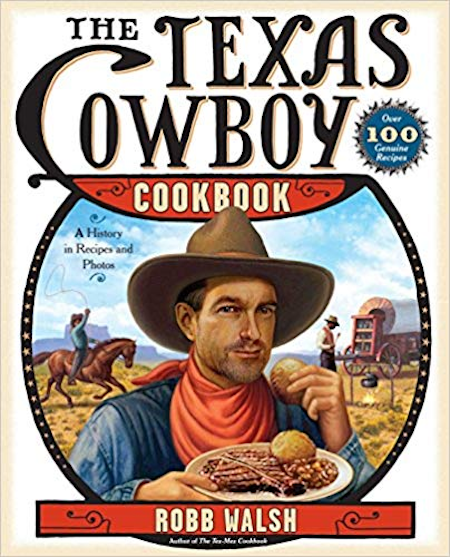 It’s the best historical treatment of its subject that I’ve yet found, and the photographs in particular (many dating from the era in question) are intensely interesting.  It’s one of my standard reference books for the “Ames Archives” series of Western novels, not just in terms of meals, but the supplies that would be carried and used by travelers, trail drives and the like.  You’ll read a lot more about them in the next Walt Ames novel, to be published in 2020.