Professor Bloom was frequently called the most notorious literary critic in America. From a vaunted perch at Yale, he flew in the face of almost every trend in the literary criticism of his day. Chiefly he argued for the literary superiority of the Western giants like Shakespeare, Chaucer and Kafka — all of them white and male, his own critics pointed out — over writers favored by what he called “the School of Resentment,” by which he meant multiculturalists, feminists, Marxists, neoconservatives and others whom he saw as betraying literature’s essential purpose.

“He is, by any reckoning, one of the most stimulating literary presences of the last half-century — and the most protean,” Sam Tanenhaus wrote in 2011 in The New York Times Book Review, of which he was the editor at the time, “a singular breed of scholar-teacher-critic-prose-poet-pamphleteer.”

At the heart of Professor Bloom’s writing was a passionate love of literature and a relish for its heroic figures.

Professor Bloom insisted that a literary work is not a social document — is not to be read for its political or historical content — but is to be enjoyed above all for the aesthetic pleasure it brings … “You must choose,” Professor Bloom himself wrote … “Either there were aesthetic values or there are only the overdeterminations of race, class and gender.”

Professor Bloom was ultimately both optimistic, in a narrow sense, and pessimistic, in a much broader one, about the durability of great literature. The books he loved would no doubt always find readers, he wrote, though their numbers might dwindle. But his great concern was that the books would no longer be taught, and thus become irrelevant.

“What are now called ‘Departments of English’ will be renamed departments of ‘Cultural Studies,’” he wrote in “The Western Canon,” “where Batman comics, Mormon theme parks, television, movies and rock will replace Chaucer, Shakespeare, Milton, Wordsworth and Wallace Stevens.

“Major, once-elitist universities and colleges,” he continued, “will still offer a few courses in Shakespeare, Milton and their peers, but these will be taught by departments of three or four scholars, equivalent to teachers of ancient Greek and Latin.”

Prof. Bloom enraged and outraged the entire “modern” movement within arts faculties across the nation.  His insistence on quality and originality, as opposed to churning out yet more Marxist-inspired dreck, was directly opposed to the “rigs of the times“.  His many books were an inspiration, including the classic “How To Read And Why“, which I highly recommend to anyone seeking an introduction to the art and science of reading for pleasure and greater understanding. 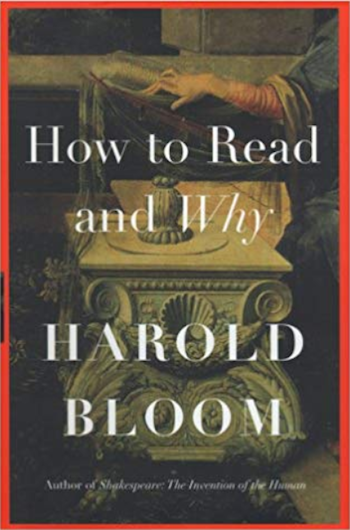 He will be sorely missed.