For some time, the US military has been investigating medals awarded for valor in combat in Iraq and Afghanistan.  It’s been postulated that some actions should have been recognized at a considerably higher level than the medals that were actually awarded.  Military.com tells us that several Medals of Honor may be conferred as a result.

Four Medals of Honor. Thirty Service Crosses. Twenty-three Silver Stars. After a three-year review of medals for military heroism in conflicts following Sept. 11, 2001, the Pentagon has upgraded 57 awards for valor — and so far, sailors are the biggest beneficiaries.

Officials told Military.com that the review, which was launched in 2016 and will formally conclude on Dec. 31, assessed roughly 1,400 awards in all, presented by the four Defense Department services. Some four Army awards have yet to be announced — officials would not characterize these awards, however, and whether, as some suspect, more Medals of Honor could be forthcoming.

It’s just been revealed that one of those Army awards is, indeed, to be upgraded from a Silver Star to a Medal of Honor. 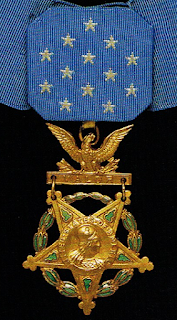 A former Army staff sergeant who took on enemy fighters at close range, first with an M249 light machine gun and then with a knife, will be the first living veteran of Operation Iraqi Freedom to receive the Medal of Honor, Military.com has learned.

David S. Bellavia, 43, of Batavia, New York, will have his Silver Star upgraded to the highest military award for valor in a June 25 ceremony at the White House, a source close to Bellavia confirmed to Military.com. The news of the award was first posted at the American Legion’s Burn Pit blog Thursday and then confirmed by Army Times. The White House is expected to announce the award next week.

Bellavia’s Silver Star citation, for heroism on Nov. 10, 2004, in Fallujah, Iraq, reads like the script of an action movie.

Again, more at the link.

I’ve read SSgt Bellavia’s book, “House to House“.  It’s an extraordinary chronicle of combat, right up there with many of the best combat memoirs from earlier wars. What I still don’t understand is why it’s taken so long to review some of these awards, and make the decision to upgrade them.  It’s bureaucratic process gone mad!  This should have happened within, at most, a year or two.  Back in World War II, the decision to award a Medal of Honor was frequently taken within weeks of the incident concerned.  Why is it so much more difficult to do so today?

Unfortunately, for the highest awards, it was much the same in South Africa.  During my service, that country’s highest award for valor in action, equivalent to the US Medal of Honor, was the Honoris Crux Diamond.  Sadly, despite several incidents that popular opinion in the SA Defense Force considered fully worthy of the HCD, that medal was never awarded – a travesty of justice, in my opinion.  There were never any reasons given, except that no individual act was considered (by the military bureaucracy) to rise to the level necessary for its award.  It was generally thought among the troops that one would have to actually be killed during a display of valor to get the HCD.  That’s what the bureaucrats seemed to think was a necessary part of the award, anyway.  That thought probably devalued or degraded the award in the eyes of those for whom it was intended – the men in uniform.  Surely they knew best what constituted valor and deserved appropriate recognition, rather than rear-echelon military bureaucrats?

I wonder whether some sort of political correctness played a part in the delay in recognizing such extraordinary feats of valor?  Is it, perhaps, the case, in these benighted modern times, that honoring someone for acts of extreme violence, even if self-sacrificial in nature, is no longer considered appropriate?  I can’t help but think that delays of well over a decade must surely be caused by something other than mere routine processing of the awards.  What say you, military readers and veterans?