Yet again we’ve seen the usual suspects scream in outrage at even the suggestion that women’s behavior might just possibly contribute to their getting raped.  This time it’s in Kenya.

A top Kenyan university has apologised after blaming “reckless” female students for becoming victims of rape.

The security memo, which was sent to all students on Tuesday, was “insensitive”, the University of Nairobi’s vice-chancellor admitted.

A petition started in response to the memo questioned how women could be blamed for their own rape.

The memo, signed by the head of security, said the rising number of cases of robbery and rape of university students in the capital, Nairobi, occurred at certain spots close to campuses.

“In all the three rape incidences reported last year, a clear case of recklessness on the part of our female students can be drawn,” it said.

It gave an example of a drunk student who was gang-raped on her way back in the early hours of the morning.

It also included tips about how to keep safe in social gatherings, suggesting students always go out with trusted friends, memorise important numbers in case they lost a phone and never leave their drinks unattended.

Ms Onyango, who is raising funds to launch Safe 24/7 to offer free therapy and support to survivors of rape, said such advice given to women was part of the problem.

“Right now, where we go, what time we will go there, who we will go with, how we will get there, what we will wear etc is governed by how safe we will be and that is NOT normal neither is it OK!

“If men just stopped raping us, rape will stop.”

I understand and appreciate Ms. Onyango’s sentiments:  but I also know that she’s basically lying to herself and to everyone who accepts her words as even a partial reflection of reality.  Here’s the cold, hard truth:  Rape is an expression of power and dominance.  It’s been that way roughly since the first rapist realized that his intended victim was weaker than him.  (Note that men can be as much victims of rape as women, particularly in circumstances where women aren’t available – for example, in prison.)  Physical strength is used by the rapist to take what he wants (and sometimes she – yes, female rape is a thing).  In a world where the rapist may have nothing else under his control, he feels that he can take and use a victim whenever and wherever he wants, and thus control them whether they like it or not.  In so many words, that’s the reality of rape.  Other factors – social conditioning, substance abuse, upbringing, etc. – do play a part, but they’re all merely facets of the basic reality of power and dominance.

To say to a rapist that he’s got to “just stop raping us” is facile, idiotic, stupid . . . one rapidly runs out of adequate descriptions.  It defies reality.  It won’t work.  It has never worked, and never will work.  In Africa in particular, it won’t work.  Cherie Blair pointed that out last year, and I added more details when I discussed her warning.  It’s still true.

My main problem with those who talk about a “rape culture” and blather on about the need for “education for rapists” (by which they mean any man, because in their eyes we’re all at least potential – if not incipient – rapists by definition) is that they have no idea what they’re talking about. Their world view isn’t grounded in reality, but in some kooky moonbattish perspective that appears to stem from the same universe where unicorn farts generate power. The real world simply isn’t the way they want to see it – but they can’t and won’t accept that. If you try to point out to them that this is the case, they scream blue murder and accuse you of sexism, political incorrectness and anything else they can think of.

I know a lot more about rape than those liberal/progressive/feminist idiots who’ve never experienced anything like it, and who think that even impaired consent (as in, being drunk) amounts to rape.  They have no idea.  Frankly, I hope and pray that they never will have any idea . . . but their bloviating stupidity is just too much.

I stand by those words, and the rest of what I said back then.  With the greatest of respect to my lady readers, I say:  if you believe that you’ll solve the problem of rape by simply telling or persuading men not to rape women, you’re living in cloud cuckoo land.  It won’t work.  Even to say it is to deny reality.  It’s as simple as that.

Women also need to understand and accept that their behavior can, and does, attract rapists.  If you look like prey, you will attract predators.  If you go where prey gathers, you will run into the predators who prey on them there.  That’s true for lions preying on springbok, impala or gazelle on the plains of Africa.  They don’t go where their next meal isn’t:  they go where they know their next meal can be found, and attack it there.  That’s equally true for rapists.  Why do you think they tend to concentrate their efforts where they know they can find easy prey?  Drunk or drugged university students are like a victim handed to them on a silver platter.  They know these kids – and let’s face it, they usually are still kids, not yet fully mature – simply can’t handle their drink, and are going to be egged on to over-indulge by their “friends” and fellow students.  After the booze and/or drugs have taken effect, they’re basically victims on the hoof, injured prey at the mercy of the predator.

I’m not condoning the behavior of rapists in the slightest.  I agree, they deserve the harshest punishment, and I’ll administer it myself without a qualm if the need arises.  This meme, which I posted back in 2017, still holds true: 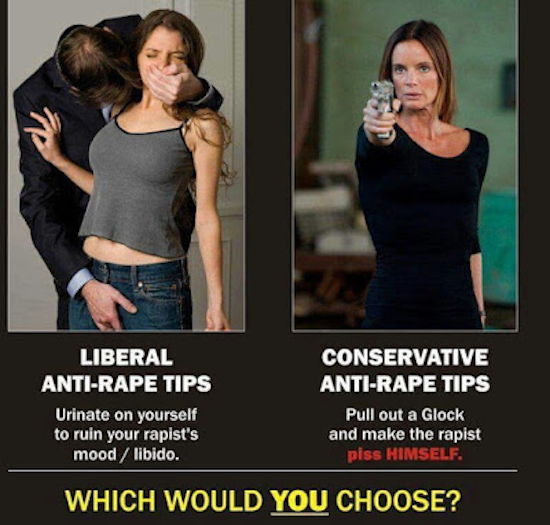 I’ve provided more than a few ladies of my acquaintance with the means, and the training, to do exactly that, and I remain ready, willing and able to do the same in future.  Rapists are scum, (im)pure and simple, and deserve to be treated as such.

However, saying that doesn’t alter the reality that if you put yourself in a place, and/or in a position, to become a victim, the odds are pretty good that someone will make you a victim.  Even if you do everything right, there are those who’ll seek to prey on you.  That’s a very nasty thought, but it’s also a reality;  which is why we should be prepared to defend ourselves if necessary.  Nevertheless, it’s better to stay away from places where that’s likely to be needed.  I’ve quoted John Farnam’s sage advice in these pages on several occasions, and I daresay repeating it here won’t be amiss:

The best way to handle any potentially injurious encounter is: Don’t be there. Arrange to be somewhere else. Don’t go to stupid places. Don’t associate with stupid people. Don’t do stupid things. This is the advice I give to all students of defensive firearms … Crowds of any kind, particularly those with an agenda, such as political rallies, demonstrations, picket lines, etc are good examples of “stupid places.” Any crowd with a high collective energy level harbors potential catastrophe. To a lesser degree, bank buildings, hospital emergency rooms, airports, government buildings, and bars (particularly crowded ones) fall into the same category. All should be avoided. When they can’t be avoided, we should make it a practice to spend only the minimum time necessary there and then quickly get out.

The University of Nairobi’s memorandum may have been “insensitive”, but it was also accurate.  That’s the way the world is, even if it’s not the way women want it to be.  To reject the memo on the grounds of insensitivity, or to blame it for “victim shaming”, is to deny and defy reality.  Good luck with that.  You’re going to need it.