‘Faces Of Meth‘ was a photographic exhibition arranged by the Multnomah County Sheriff’s Office, Oregon, in 2004. It featured, among others, the images below. 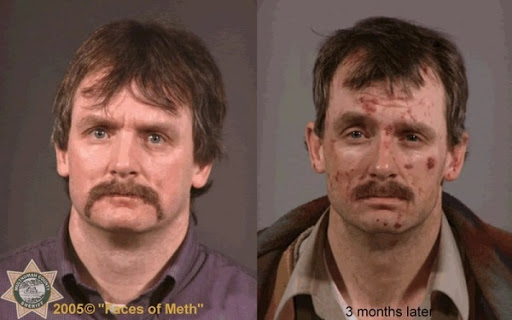 It showed pictures of methamphetamine users when they were first arrested, followed by a second picture of them during a subsequent arrest months or years later, showing how dramatically their appearance and physical condition had deteriorated. 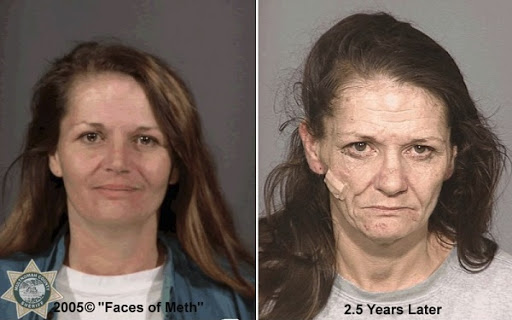 The Sheriff’s Office has just released a follow-up project called ‘From Drugs To Mugs‘. This time they’re focusing on users of all illegal drugs, not just methamphetamines. A news report about the program gives more details.

Released in the hope that they will make kids think twice about ever touching drugs the pictures show how addicts have lost teeth and scratched their skin to the bone.

The new photographs show the first arrest of a drug user partnered up with a picture taken in some cases only three months later.

They have been put together by the Multnomah County Sheriff’s Office in Oregon and now include users of all hard drugs including cocaine, heroin and meth.

‘Faces of Meth went round the world, it captured peoples revulsion and imagination,’ said deputy Bret King, 45, who was instrumental in putting together the original Faces of Meth project in 2004.

‘As I was putting together the project and touring the country trying to highlight the effects of meth on people, I had a nagging feeling that I knew I wasn’t bringing the whole picture to people’s attention.

‘Every single person I booked and interviewed who was not just a meth addict but a heroin user or a coke-head had started on some seemingly innocent drug like alcohol or cannabis.

‘Everyone experiments at college or school and I want From Drugs to Mugs to show kids that everyone in those pictures started on cannabis, they didn’t just dive head first into heroin.

‘So I ask the students at schools to look at these people and think about their actions, otherwise that could end up being you,’ said deputy King.

Faced with an endemic drug problem in the north west of the U.S., the Multnomah Sheriff’s Office has also produced a heart-wrenching educational documentary to aid in its fight against young people turning to drugs.

‘I want to be able to illustrate the connection between that first decision to use drugs and then down the road when it’s a horrible mess,’ said deputy King.

‘This is a battle for peoples hearts, their minds and ultimately their spirits,’ said Agent Tyree.

‘If I could put each and every kid who thought about using drugs in a room with a drug dealer, a drug addict, a judge, a prosecutor and a parent, maybe not even their own parent, they would all say the same thing: “Don’t do it, kid”.’

There’s more at the link. Bold print is my emphasis.

This is the ultimate slap in the face to those who maintain that cannabis is a ‘harmless’ or ‘victimless’ drug that should be legalized. As I’ve mentioned before, I worked as a prison chaplain. I’ve seen at first hand the depths to which drug users descend – people who started out as solid, upright citizens, but sank into crime and violence to fund their addiction. Even more pitiful are those who end up as ‘permanent victims’, turning to prostitution, carrying out petty crimes on the orders of others in order to ‘earn’ their daily ‘fix’, destroying their own families and making themselves homeless by stealing from, lying to and betraying everyone they love.

Don’t ever try to tell me that legalizing drugs will be a good thing, because if you do, I’ll ram the reality right back down your throat. I’ve seen too much of it . . . and I can still taste the nausea.

Here’s a preview of the 48-minute video that forms the heart of the ‘From Drugs To Mugs’ program.

I’d like to thank Deputy King and the Multnomah County Sheriff’s Office for producing this program, and I wish them every success. They’re saving lives.