The late Australian author Russell Braddon was one of the most extraordinary writers to emerge from World War II.  His prolific output includes “The Naked Island“, his world-famous and best-selling account of his experiences as a prisoner of war under the Japanese;  “Cheshire VC“, a study of the wartime career and post-war conversion of one of the top bomber pilots during the war (who is currently being investigated, along with his wife, for possible canonization as a saint by the Catholic Church);  “Nancy Wake: World War Two’s Most Rebellious Spy“, a true account of an extraordinary woman and her exploits with the French Resistance;  “The Year of the Angry Rabbit“, a very funny novel about the end of the world at the hands of giant mutated Australian rabbits;  and numerous other novels and works of non-fiction.

One of his funniest novels was “The Progress of Private Lilyworth“. 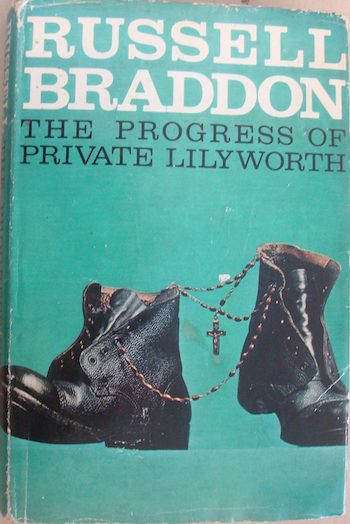 It’s about a British Army private in Northern Ireland during The Troubles of the 1970’s.  Troubled in his conscience about the seeming daftness of it all, Private Lilyworth decides to dress as a nun and use “her” calming influence to end the riots.  Needless to say, this leads to riotous misunderstandings, and catastrophically funny consequences.  I laughed my head off when I first read it, and I’ve kept it in my library ever since.  Acerbic, biting and savagely satirical, it’s a masterpiece of the genre.  Braddon pulls no punches in his portrayal of politics, organized religion, and the insanity of the then-current situation in Northern Ireland in general.

Private Lilyworth’s antics will (he hopes) lead real nuns, and (in due course) Protestant clergymen as well, to emulate “Sister Theophila’s” example and suppress the riots.  This is what happens when that gets started.

Outside [Lieutenant-Colonel Digby’s] office milled a large crowd of journalists, photographers and cameramen;  and through them he and Lilyworth threaded their way.  Flash lights flashed, questions flew, Lilyworth looked nunly and Digby, time after time, snapped “No comment” – which made him feel importantly powerful – like a trade union leader emerging from yet another conference with the Prime Minister about yet another calamitous strike.

“Are you prepared to at last tell us,” demanded the doyen of the journalists, “where Sister Theophila resides?”

“No,” replied Digby, climbing into his jeep.

“May I have your autograph, please, Sister?” asked a genial looking man from M.I.5 disguised as Lord Thomson of the Sunday Times.  He offered a sheet of glossy paper on which he hoped she would leave her fingerprints for the edification of his boss – who was convinced that Theophila was a Russian spy.

Smiling sweetly, Theophila shook her head, kept her Russian fingers on her rosary beads and settled herself, like a virgin martyr, on the seat beside Digby.  Who, starting the jeep, drove it straight at the nearest journalists.  Leaping aside, his victims rushed for their hired cars and roared off in pursuit, their colleagues’ cars behind them.

At the first crossroad a station wagon cut crazily into their convoy.  It was black with nuns and hunched over its wheel was a Mother Superior who knew no more of the Highway Code than she did of the Kama Sutra.

A second station wagon joined them when they halted at a traffic light.  Ignoring the mandatory red (because the Mother Superior who drove was color blind) it howled past their convoy – urged on by its complement of nuns – thereby obliging a corporation bus to go hard amidships and demolish a bookshop.

“That’s a Protestant bookshop those bloody nuns have pushed us into,” roared the Protestant bus driver.

“Good thing too,” shouted one of his Catholic passengers.  “Full as it is of filth that any decent country would ban.”

Leaping out of his cabin, the driver rushed to the intersection and screamed for the police, the Special Constabulary and the Army:  and was just about to scream for the United Nations as well when a third station wagon full of nuns knocked him down and ran him over.

Skidding to a halt the other side of the intersection the Mother Superior sent one of her Sisters back to examine the victim.

“Are you a Catholic,” enquired the Sister gently.  “Shall I fetch you a priest?”

“I’m a Protestant and I want a doctor,” gasped the bus driver.

“And isn’t that just like you heretics?” murmured the Sister – letting his head crash back onto the road.  “Condemned to eternal damnation though you be, it’s your bodies you think of still, never your souls.”  And, leaping to her feet, ran back to the station wagon – which roared instantly off on its errand of mercy.

Arrived there, it found it was late.  The enviable Sister Theophila was already being ushered through the front line by Corporal Campbell – and behind her marched a determined phalanx of earlier nuns led by two other Mothers Superior.

By way of answer Lilyworth merely flexed a muscle in the arm held by Campbell:  then walked alone into a tumultuous no-mans-land.

From a position of safety, Michael O’Reilly, a half brick in his hand, surveyed Theophila with a mixture of resentment and fear.  Resentment, because the mob would turn on him if they caught him throwing his missile;  fear, because he’d be expelled from the Breakaway Branch of the Unofficial I.R.A. if he didn’t throw it.

Torn between fear of the mob and fear of the I.R.A., he hesitated:  and while he did so the first of three Mothers Superior thrust through the front line – her subordinates, like black chickens after a black hen, following behind.

“Holy Mother of God,” breathed O’Reilly, terrified, “more of ’em.”  But his terror of the I.R.A. was even greater than his terror of mob and church combined:  so, furtively – in the great, still silence that enveloped Sister Theophila – he took aim.

And threw, just as the first of the Mothers Superior drew level with Theophila.

“But look what he’s done,” hissed Theophila, hoisting her habit to reveal a hairy, bleeding leg.

“Sister!” thundered the Mother Superior:  and then (O’Reilly having thrown his second brick) herself shrieked and – hoisting her habit – stared incredulously at her stockinged bleeding leg.

“Forget the ten Hail Mary’s,” she snarled.  “I’ll get you a Plenary Indulgence instead.” Then bellowed:  “Reverend Mothers, Sisters – charge!”

And, grimly, habits hitched, oval, well-scrubbed faces very un-nunlike, they charged.  And the mob, in several hundred different directions, fled.  And Theophila, turning soldierlike on her heel, made her way back through the black regiment of her Sisters in Christ to Digby and his Army jeep.

But Sister Theophila drove off very sedately – followed by all the Press in all the hire cars in Belfast.  Followed until the first road block.  Through which she, armed with her permit from Digby, passed almost instantly.  While the Press cars were halted, and thoroughly searched.  And found, every one of them, to be carrying arms.  For the very good reason that arms had been hidden in them while their occupants were out watching Sister Theophila’s most recent triumph over the forces of juvenile un-reason.

“You’re under arrest for gun running,” the occupants of each car were told.

“We’re Press,” screamed the doyen, to whom nothing so outrageous had happened since his arrest as an Israeli agent by the Irakis simply because he was circumcised.

“If you say so,” said Digby’s men politely, because Digby had told them, whatever they discovered in the journalists’ cars, even if it was nothing, that they must be polite.  “But you’re also gun runners;  so get out of your Mercedes Benzes and come this way, if you please, or do we have to f***ing shoot you?”

Things get even more screwy when Protestant clergymen join the fun, and politicians try to take credit for “Sister Theophila’s” success, and things spiral completely out of control.  It’s a magnificent satire, and I recommend it highly.