One of the most remarkable autobiographies to come out of World War II was that of Leo Marks, who became the code specialist for Special Operations Executive (SOE), the clandestine operations department set up by Winston Churchill with the directive to “set Europe ablaze”.  SOE supplied arms, money and operators to resistance movements all over occupied Europe and throughout the Far East.  It made many mistakes and experienced many failures, but grew into a massive organization that made a measurable contribution to victory.

Many years after the war, Marks wrote about his SOE experiences.  He battled for almost a decade to get official clearance for his book (which talked about encoding and code-breaking methods that had not hitherto been discussed – some of them devised by him.  Many are still in use, and still secret.)  Eventually, “Between Silk and Cyanide” was published in 1998, shortly before his death. 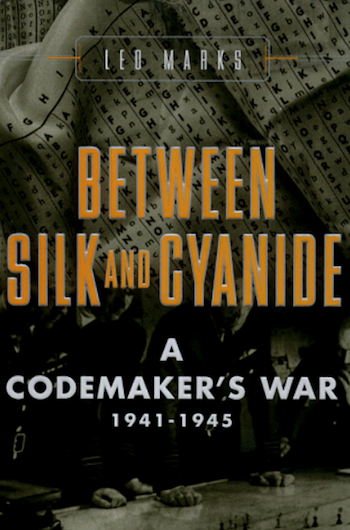 The book got its name due to the need to provide codes to agents that could not easily be detected during body searches by the German occupying forces.  Marks wanted them printed on silk, which won’t make a noise when patted down, and is so thin it can’t be detected by feel when it’s sewn between layers of other clothing.  In this excerpt, Marks explains how he sold the idea to his (very senior) superiors at SOE.  They were initially unimpressed, because silk was a vital strategic material during wartime, with huge demand for limited supplies.  He’d have to be convincing.

“Since you’re here,” Courtauld said wearily, “you’d better explain why these lollipops or whatever they’re called have to be on silk.”

If I had a lollipop I knew precisely where I’d stick it.  In lieu of such a luxury, I leaned forward and, before Courtauld could stop me, or I could stop myself, ran my hands rapidly over his tunic, beneath his armpits, and as far down his abdomen as propriety permitted.  In case he took this personally, I hastily explained that the Gestapo and the Vichy police cordoned off entire streets without warning and searched everyone in sight.  If he were a Frenchman carrying a code, wouldn’t he prefer it to be on silk which groping hands couldn’t feel rather than on sheets of paper hidden inside a portable object which they might have time to examine?

His mouth was so wide open that I feared he’d have a stroke.  There was an extraordinary sound from somewhere on my right.

It was Tommy Davies laughing.  “Point taken,” he said before I could offer him the same facility.  “It’s clear that silk has its advantages … I presume, Marks, that you’ve brought some figures with you?”

This was the moment I’d been dreading.  I’d prepared some estimates for them but Hitler’s fortune-teller could have done a better job.

“Well?  Have you brought them or haven’t you?” demanded Courtauld.

I lifted the estimates from their rain-sodden envelope.  They’d been typed by Muriel as if they were a royal proclamation but each page was covered in manuscript corrections and the ink had run.  Wishing I could join it, I gave the drier copy to the Gestapo (Courtauld), and surrendered the other to the Vichy police.

Watching them cordon off the rest of the world while they searched the pages for concealed common sense was a lesson in concentration I wished I could have shared with all coders.

They reached the last page without complaining about the ink-blots (there were enough for a Rorschach test), then exchanged glances like Gauleiters at the door of a torture chamber.

They ploughed through the European estimates with growing despair.  Courtauld then gave me a brief lecture on how they should have been prepared which was probably priceless and which I pretended to understand.

Then Davies took over.  “What the devil’s this?” he enquired.  ” ‘Contingencies, various’, with none of them stipulated.”

“Perhaps they’re too confidential to share with us?” suggested Courtauld.

Another mistake.  In attempting to keep the document to consumable length, i hadn’t considered what would be important to them.  I rattled off a few of the ‘contingencies, various’ – How many agents would lose their codes? … How many replacements would go astray? … How many [codes] would Secret Armies need?

Davies interrupted sharply.  “Have the country sections agreed to use the bloody things?” he asked.

“They will, sir.  Colonel Nicholls is going to talk to them himself.”

“And you’ll have a word or so to say, I don’t doubt,” commented Courtauld.

“Only to fill in the details, sir.”  I began explaining why the ‘bloody things’ would make so much difference to our agents.

“We’re not questioning their merits,” said Davies, “but the reality of getting silk.  There’s a queue a mile long for it.”

“You have an excellent case,” said Courtauld quietly, “but so have all the others.”

How many people with excellent cases have sat in this chair asking them to use their influence to produce the unobtainable?

Davies glanced impatiently at his watch.  Courtauld gave a hardly perceptible nod.  “Well now,” said Davies, “if you’d like to leave these figures with us…”

I tried to spot the waste-paper basket, but I was the only one in sight.

“Unless you feel there’s something you should add,” said Courtauld.

“Yes, sir.  There is.”  I wondered how to convince them that silk codes were more than just another ‘excellent case’.

The ‘hard men’ – whom I finally recognized as responsible men seeking hard facts – waited expectantly.  What would jolt them into jumping the queue for the sake of the agents queuing to jump?

I decided to stake the future of our codes on a loaded question.  “Will SOE be allowed to know the date of D-day?”

They looked at me in astonishment.  “Why the devil do you ask that?”

“Because at some stage in the invasion the agents will have to be sent instructions from London.”

“What of it?” demanded Courtauld.

“It would be safer for SOE to use Courtauld’s code* than the present systems.”

Courtauld sat motionless.  Davies rose from his chair.  “What do you know about Courtauld’s code?” he thundered.

“That it’s a variant of the commercial code, and you use it to minimize the high cost of international cables.”

“Who told you about it?” he persisted.

“No,” said Courtauld heavily.  “We’ve more important matters to dispose of.”  His other half continued to glare at me.

I waited to be disposed of.

“We’ll help you all we can,” said Courtauld, “though the final decision won’t rest with us.”

“Far from it,” said Davies.

“It will be made by a certain person who has very little time to spare.”

“It would be a great help to him – and to us – if you could put down on half a sheet of paper the difference silk codes would make to our agents.”

“Half a sheet at most!” echoed Davies.

There was a pause.

“Is it now?” said Courtauld softly.

* George Courtauld, mentioned in this excerpt, was before the war a director of Courtaulds, a major British textile and chemical producer.  It used its own code to communicate with its subsidiaries overseas over the public telegraph system.

** Agents usually carried a cyanide capsule to commit suicide if their capture was imminent, rather than face certain torture at the hands of the Gestapo, and the risk of betraying their comrades and their mission.

Not only did that phrase become the title of Marks’ book, it was also successful in persuading the powers that be to allocate enough silk to SOE for the printing of their codes and ciphers.  That, in turn, made a major contribution to the safety of their agents in Europe under German occupation.

Marks’ book is a remarkable memoir of the ‘secret war’ that raged across Europe and the Far East during World War II.  I recommend it highly.  He’s very blunt about the failures and shortcomings of SOE and other intelligence organizations, as well as mentioning their successes.  From that perspective alone, it’s a very worthwhile contribution to the history of the Second World War.