Rear Admiral Daniel P. Mannix III served in the US Navy from the 1890’s until the 1920’s.  He recorded an amusing, absorbing account of his service in his private journals, letters, etc.  Later, his son, well-known author Daniel P. Mannix IV, took those documents and used them to write “The Old Navy”, a record of his father’s life and naval career. 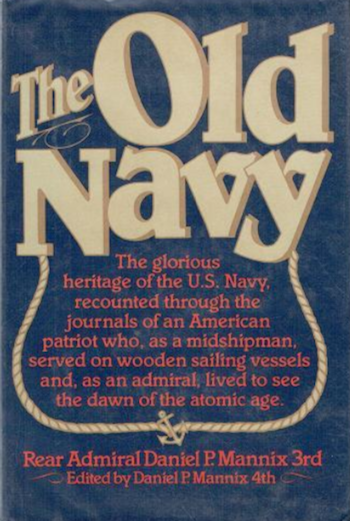 The paper edition is long out of print, although used copies are available.  Fortunately, there’s also an inexpensive Kindle edition, which makes the e-book version available to a new generation of readers.

Here’s a selection of excerpts from Admiral Mannix’s early years in the Navy, from his time as a cadet at the Naval Academy in the 1890’s to his naval service in Europe prior to World War I.

Although we didn’t realize it we were witnessing the end of an era – the era of Sails and Spars;  of Wooden Ships and Iron Men.  To the old-timers in the Navy who ran things, it seemed incredible that the time would come when sails would be completely abandoned.  Even the warships of the period still retained their masts and carried sails and spars so if the engines failed, the ships could proceed under sail as they had since the beginning of seafaring.  Each summer the cadets took a cruise on a full-rigged ship across the Atlantic to Funchal, Madeira, off the West Coast of Africa.  I took two of these cruises on the [USS] Monongahela.  Her only means of propulsion was her sails;  there was no machinery of any kind on board.  There was no steam or electricity to do the heavy work;  it was all done by the muscles of the crew.

The sailing ship seamen averaged twice the age of the modern twenty-year-olders.  They were much more primitive and caused more trouble ashore than do the modern crews.  They were simpler minded and not nearly as well educated as the modern men.  Many of them signed the payroll by making a cross, but in physique they were vastly superior.

As an example, the “captain of the maintop” was a petty officer of many years’ service;  he was probably forty years old and weighed at least a hundred and eighty.  I have seen him go hand over hand up the main topsail sheet (a vertical rope, perhaps two inches in diameter, running from the fife rail on deck up to the main yard) and, when he was high above the deck, let go with his left hand and “chin” himself three times with his right.  Mind you, he wasn’t holding on to anything horizontal like a bar in a gym, but to a thin vertical rope.  Think of the grip necessary!

Mannix volunteered for service during the Spanish-American War, interrupting his Academy studies to do so, and was assigned to the USS Indiana, a battleship in the blockading squadron off Cuba.

This evening there occurred an event which has not been given its proper place in history.  The hero of this exploit was the redoubtable Juggy Nelson.  Personally, I think it surpasses Hobson‘s feat with the Merrimac.

Juggy was serving on the New Orleans and was given picket duty on the ship’s launch.  As it was a hot night, he and the fireman of the launch stripped themselves and went swimming.  Not content with that, they swam ashore and started walking along the beach.  Their white bodies shining in the moonlight attracted the attention of the Spaniards who, although they had grown reconciled to seeing our pickets close inshore, obviously considered this as going too far.  They rushed to the attack from all directions, firing their rifles and even throwing a barrage of stones, bottles, and every other missile they could find.  Juggy and the fireman fled down the beach stark naked with the Spanish Army in hot pursuit.  As the enemy began to gain on them, they plunged into the surf, followed by rifle bullets, brickbats, and curses in choice Castilian.  When Juggy got back to his ship, his captain, who had no sense of humor, put him under suspension for ten days.

Midshipman Mannix was present at the Battle of Santiago de Cuba on July 3, 1898.

As the destroyers advanced against us the fire of our secondary battery and the starboard 8-inch turret guns was shifted from the cruisers to them and at the same time we sent a signal to the Gloucester, “Destroyers coming out”.  This signal was misunderstood (perhaps purposely).  [The Gloucester claimed later that she thought our signal was “Gunboats close in”.]  She headed for the Spaniards at full speed running directly into our zone of fire and, before “Cease firing” could be transmitted to the secondary battery, we barely missed sinking her.  Just before the order was obeyed one of our 8-inch shells struck the Spanish destroyer Pluton, and she disappeared in a great cloud of flame and smoke which, as it dissipated, showed a few of her people struggling in the water.

From my station on the bridge I could look aft down the entire length of our ship.  The broadside guns of the secondary battery were mounted along the superstructure rail high above the deck, so high that the crew manning them stood on swinging gratings at least eight feet above the deck level.  They had no protection whatever, not even gun shields, and a fall from that height would have been serious under any circumstances.  The men were stripped to the waist and the tremendous exertion which they were putting forth emphasized the splendid muscular development of their arms and chest.  They made me think of gladiators in a Roman arena.

Because we had no smokeless powder in those days, after a few salvos everything and everybody were in the midst of a dense cloud of thick white smoke.  It frequently became necessary to sound “Cease firing” to permit the gun pointers to see their targets.

This certainly didn’t add to efficiency in gunnery but it did add tremendously to the spectacle.  At one stage of the battle we saw what seemed to be a great cloud of smoke traveling at high speed on the surface of the water.  The advanced part of the cloud became disturbed and we could see the white foam of a bow wave.  Then out of the smoke, breasting the wave, came the bows of a great ship, the Oregon, starting the famous race in which she, a battleship, actually ran down a fast cruiser, the Cristobal Colon.

As a Lieutenant (junior grade), Mannix was aboard the battleship USS Kearsage when it led a squadron of US Navy vessels on a visit to Europe in the early 1900’s.

While the Kearsage was stationed off Pensacola, we had staged a series of drills with our 8-inch guns.  Ever since the Battle of Santiago, gunnery had been a hobby of mine and I had worked hard to train my gun crew.  I was in command of the afterturret and we were able to score ten successive bull’s eyes in five minutes, firing at a target 1,600 feet away, while the ship was moving at the rate of ten miles an hour.  This proved to be a world’s record and Admiral Taylor, chief of the Bureau of Navigation, personally commended us.

Ashore [in Kiel, Germany] there was a large number of attractive outdoor cafés, each with its own band or orchestra.  We went to the most pretentious and I had my first experience of what real beer is;  the stuff we had been drinking in the States was only a pale imitation.  Von Müller had a stein with a music box concealed in its bottom;  every time he raised it from the table it commenced playing a tune.  He supplied me with a similar stein which played a rousing march …

One [orchestral] selection I remember in particular was called, “March of Heralds’ Trumpets”.  A dozen men with long coach horns lined up in front of the band proper and introduced trumpet calls through the music.  I was anxious to have this repeated and von Müller, observing that I must begin to learn German, told me to ask the head waiter for an encore.  I didn’t know a word of German except “Ich liebe dich” which would hardly have done so when the waiter came over, I raised my closed fist to my mouth and said sonorously, “Ta-ra-ta-ra” delighted at my ingenuity.  The waiter, with a beaming smile, nodded intelligently and said “Ja, ja, bier!” and filled my musical stein to overflowing.

Mannix was called upon to meet a delegation of German officers who demanded that a Kearsage midshipman fight a duel with an Army officer he had unwittingly insulted.  This was, of course, legal in Germany at the time, but entirely illegal for US Navy personnel.

This was a facer.  I had no idea how to proceed.

Then I had a happy inspiration:  one of the few that has ever come at the right moment.  I explained that it was an American custom before fighting a duel to drink to one’s adversary.  The Germans looked rather surprised at this but concurred politely.  I had our mess attendant make up a lot of especially potent cocktails called Earthquakes, which were passed around.  To my relief, our guests found them delightful.  After we all had drunk to Germany, it was then obligatory on their part to drink to the United States.  We then drank a toast to each of the Prussian officers individually.  To return the compliment, they insisted on drinking individual toasts to the entire mess.

I am a little foggy about the rest of the afternoon.  I seem to recall a chorus of “Ach, du lieber Augustine” being sung to the tune of “Oh, Susannah” and a spirited polka danced by all hands, although looking like it might also have been a Tennessee hoe-down.  At some point, the mess attendant brought in a bowl of fruit, including a number of apples, and it was unanimously decided that this called for another round of drinks.

Finally, when the proper moment seemed to have arrived, I asked the officer of the deck for the steam cutter to take our distinguished visitors ashore.  When the boat was ready we escorted them to the gangway and saw them safely embarked.  As the cutter cleared the ship’s side, the three arose, gave a snappy salute and a resounding “HOCH!”  I was just congratulating myself on the happy termination of the affair and admiring the Germans’ martial bearing when to my horror I noticed that impaled on each helmet spike was a large, red apple.

The rest of the book is equally entertaining.  It’s a great read.