There’s a fascinating article at Firearms News titled “The Radioactive ISU-152“.  It describes how some of the biggest, heaviest tanks of World War II returned to the scene of one of their victories, four decades later, to act as saviors rather than destroyers.

The SU/ISU-152 was designed specifically to be a part of both the shock and breakthrough elements of the Soviet Deep Battle doctrine. The KV heavy tank chassis would provide the base for the massive ML-20S, a portable version of the standard 152mm howitzer in service. The gun had a range of 10km for indirect fire but was reduced to less than 4,000m when directly engaging targets. This wouldn’t be a problem for this 47 ton monster. It had 90mm of armor on the casement with an additional 120mm added to the gun mantlet. The crew of 5 whipped around the battlefield at 19 mph and could fire the gun at a maximum of 3 rounds per minute. 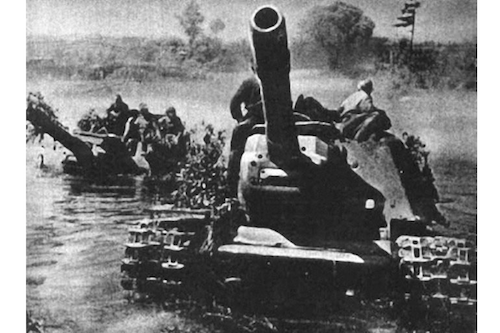 The sheer brute power of the 152mm gun easily destroyed any German tank with a direct hit earning it the nickname of the “Beastslayer”. From the counterattack at Kursk and all the way to Berlin these machines leveled any resistance the Germans could mount. During that period the ISU-152 was used to recapture a village in a strategic area used to cross the Pripyat River,in northern Ukraine. Although the battle lasted for several days, Chernobyl was once again under the red banner.

In the years after the war the small village of Chernobyl was selected to become the site of a nuclear power plant. On 26 April 1986 a tragic series of events led to the unthinkable, a nuclear meltdown. The Soviet military was now tasked with the containment and cleanup of the facility. All modes of transportation and heavy equipment would be taxed beyond their limit and time was not an ally. So the army looked around to nearby motor pools for any heavy vehicles. The 22nd Guards & Red Banner Tank division in Novomoskovsk, Ukraine, some 293 miles away, activated their aging ISU-152S and drove the 10.5 hours to the site. Due to the Soviet inventory system it’s unclear as to how many ISU-152s were sent to the site.

The ISUs returned once again to Chernobyl to help save the Soviets from radiation exposure instead of a foreign invader. The logic behind this was simple. The ISU had extremely thick armor that would afford some protection for inspectors and cleanup crews. It could also act as a makeshift battering ram to knock down buildings and help flatten debris piles so they could be buried. Some had the internals stripped and the crews now included 2-3 liquidators, the actual cleanup crew, driver, a commander to operate the radio and lastly one to monitor radiation exposure. External modifications were made that, for some even included removing the howitzer as it was an impediment for ramming buildings. Some kept their howitzers operational and the remaining stockpile of the famed 53-G rounds were fired to expedite the process. These machines were worked tirelessly until they broke down from wear or the job was completed. Those that failed during cleanup were just left in place while those lucky enough to make it to the end now rust away in a graveyard of radioactive vehicles unsuitable to go anywhere else.

There’s more at the link, including several very interesting photographs of the tanks in operation at Chernobyl after the nuclear accident.  Recommended for military history buffs.