That’s the title of a long and very interesting article by Christopher Caldwell.  Basically, he argues that a culture of “civil rights” has usurped, and threatens to overthrow (and may perhaps already have overthrown) the constitutional foundation of our republic.  I’m going to quote from it at some length, in an attempt to capture the essence of his argument.

But it is a third strand of the story, running all the way down to our day, that is most important for explaining our partisan polarization. It concerns how the civil rights laws of the 1960s, and particularly the Civil Rights Act of 1964, divided the country. They did so by giving birth to what was, in effect, a second constitution, which would eventually cause Americans to peel off into two different and incompatible constitutional cultures. This became obvious only over time. It happened so slowly that many people did not notice.

What I am talking about are the emergency mechanisms that, in the name of ending segregation, were established under the Civil Rights Act of 1964. These gave Washington the authority to override what Americans had traditionally thought of as their ordinary democratic institutions. It was widely assumed that the emergency mechanisms would be temporary and narrowly focused. But they soon escaped democratic control altogether, and they have now become the most powerful part of our governing system.

To put it bluntly, the effect of these civil rights laws was to take a lot of decisions that had been made in the democratic parts of American government and relocate them to the bureaucracy or the judiciary … The problem is that when the work of the civil rights legislation was done … these new powers were not suspended or scaled back or reassessed. On the contrary, they intensified. The ability to set racial quotas for public schools was not in the original Civil Rights Act, but offices of civil rights started doing it, and there was no one strong enough to resist. Busing of schoolchildren had not been in the original plan, either, but once schools started to fall short of targets established by the bureaucracy, judges ordered it.

Affirmative action was a vague notion in the Civil Rights Act. But by the time of the Supreme Court’s 1978 Bakke decision, it was an outright system of racial preference for non-whites.

Finally, civil rights came to dominate—and even overrule—legislation that had nothing to do with it … Civil rights law had made it impossible for Americans to get what they’d voted for through their representatives, leading to decades of political strife … More and more areas of American life have been withdrawn from voters’ democratic control and delivered up to the bureaucratic and judicial emergency mechanisms of civil rights law. Civil rights law has become a second constitution, with powers that can be used to override the Constitution of 1787.

Let’s say you’re a progressive. In fact, let’s say you are a progressive gay man in a gay marriage, with two adopted children. The civil rights version of the country is everything to you. Your whole way of life depends on it. How can you back a party or a politician who even wavers on it? Quite likely, your whole moral idea of yourself depends on it, too. You may have marched in gay pride parades carrying signs reading “Stop the Hate,” and you believe that people who opposed the campaign that made possible your way of life, your marriage, and your children, can only have done so for terrible reasons. You are on the side of the glorious marchers of Birmingham, and they are on the side of Bull Connor. To you, the other party is a party of bigots.

But say you’re a conservative person who goes to church, and your seven-year-old son is being taught about “gender fluidity” in first grade. There is no avenue for you to complain about this. You’ll be called a bigot at the very least. In fact, although you’re not a lawyer, you have a vague sense that you might get fired from your job, or fined, or that something else bad will happen. You also feel that this business has something to do with gay rights. “Sorry,” you ask, “when did I vote for this?” You begin to suspect that taking your voice away from you and taking your vote away from you is the main goal of these rights movements. To you, the other party is a party of totalitarians.

And that’s our current party system: the bigots versus the totalitarians.

There’s much more at the link.  Highly recommended reading.

I’ve seen this happen in microcosm in the American penal system.  Convicts are sent to prison both as punishment for their crimes and – perhaps even more important – to safeguard society from their depredations.  However, since the rise of the civil rights culture, pressure groups have used relevant legislation and judicial action to enforce more “humane” treatment for convicts, whether or not it serves any useful correctional purpose, and whether or not it serves either as punishment (or an effective means of rehabilitation) for the perpetrators, or protection for the victims.

I’ve had many people tell me, even to my face, that prison should be a place of punishment, not a cosseted refuge where criminals can relax while planning their future crimes.  We hear jokes about the so-called easy-going conditions in Federal prisons – “Club Fed“.  Most people don’t know that those conditions were mandated by courts, which have required the Bureau of Prisons to provide amenities, facilities and protection for “inmate rights” that were not originally built into the system – and, in many peoples’ opinion, never should have been.  The BOP had no choice.  The “civil rights culture” was used against it.  To this day it’s forced to spend a large part of its budget – paid by taxpayers, you and I, let me remind you – to satisfy those demands.  That’s also why it has to maintain a large staff of in-house lawyers, to deal with litigation from inmates.

Inmates know – and pressure groups are quick to remind them – that they can use civil rights laws to demand, and sometimes get, privileges to which they would otherwise not be entitled.  Failing that, they can use lawsuits to harass “the system” and force it to spend hours, days or weeks of staff time in responding to their nuisance suits.  (Here’s just one extreme example, out of many I could cite.)  The authorities are forced (by the courts) to provide law libraries for them, so that they can spend their days figuring out what lawsuits to file and how best to manipulate the system.  I’ve watched them do it, day in, day out.  Some even tried to ask me for suggestions as to what grounds they could use to “sue the Man” for more benefits.  “[In 2014], more than 32,000 lawsuits were filed in federal courts from inside prison walls — 11% of all civil cases.  More than 6,200 so-called in forma pauperis cases were on the Supreme Court’s docket in June [2015] — 77% of the total.”

I see exactly the same culture pervade our society as a whole.  Look at what’s happened to President Trump since his election.  Any and every group and individual that’s disagreed with one or more of his policies has turned to the courts to block their implementation.  With the help of liberal, civil-rights-oriented judges, they’ve succeeded in imposing significant delays on many of his efforts, even if they haven’t been able to overturn them.  The forces behind such efforts are also loudest in their condemnation of President Trump’s efforts to appoint judges who will exercise their office in accordance with the Constitution, rather than from a civil-rights-culture perspective.  They appear to be terrified of what may happen if he gets to appoint a larger conservative majority to the Supreme Court – witness the liberal “panic” when Justice Ginsburg became seriously ill, and was feared to be at death’s door.

I think Mr. Caldwell has advanced a very rational opinion in his article, and in his book on the same subject. 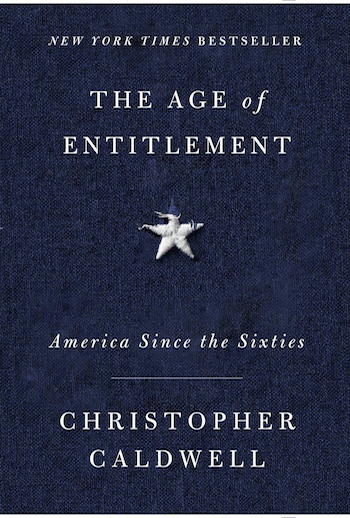 Both are worthy of attention, IMHO.  I’ll be buying his book, to read more about his perspective.  From what I’ve seen so far, he appears to make a good case.