It looks as if Japan can claim that honor as of last weekend. The Telegraph reports:

A fleet of high-performance cars, including eight Ferraris, has been involved in one of the most expensive accidents in history after an astonishing multi-car pile-up in Japan.

Police said three Mercedes Benz cars and a Lamborghini Diablo were also involved in the massive crash at the weekend on the Chugoku Expressway, in the country’s south-west. 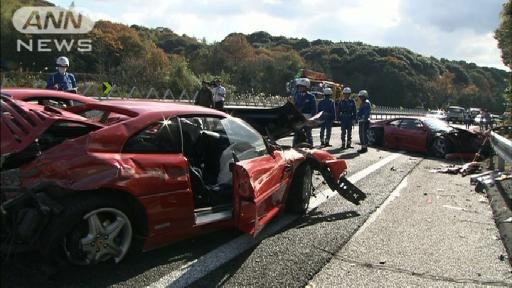 Witnesses reported hearing a “tremendous noise” just a few moments before the accident on the Yamaguchi prefecture highway amid terrible driving conditions.

While the majority of the 14 vehicles – which also included a Japanese supercar Nissan GT-R Skyline and a Toyota Prius – were travelling along the Osaka Prefecture-bound bended lane at least one Mercedes CL600 was driving in the opposite direction.

Television footage showed the cars – either wrecked or destroyed – spread across the highway, in a trail of crumpled metal and broken glass. Several of the vehicles were wedged up against the metal barriers.

Miraculously, none of the drivers – the majority of whom are reported to be foreign car enthusiasts – were seriously hurt in the wreckage but the bill is still bound to be painful nonetheless.

Such was the severity of the damage, several of the luxury cars have been written off, leaving their owners with the nightmare scenario of seeing their prized possessions turned into expensive scrap metal.

There’s more at the link. A Japanese-language TV news report on the accident may be viewed here.

Somewhere, a number of insurance agents are crying their eyes out . . .